Treachery is an ever-expanding collaborative or solo game of limited resources and alliance-building, where each game poses unique victory conditions, and you must race time, coordinate efforts, and improve your odds in order to flourish and win.

Round’s End: If a player has 0 loyalists, s/he discover top card of SOCIETY and recruits that Character for free.

The game ends as soon as players complete all VICTORY requirements on all Plots: all players win! 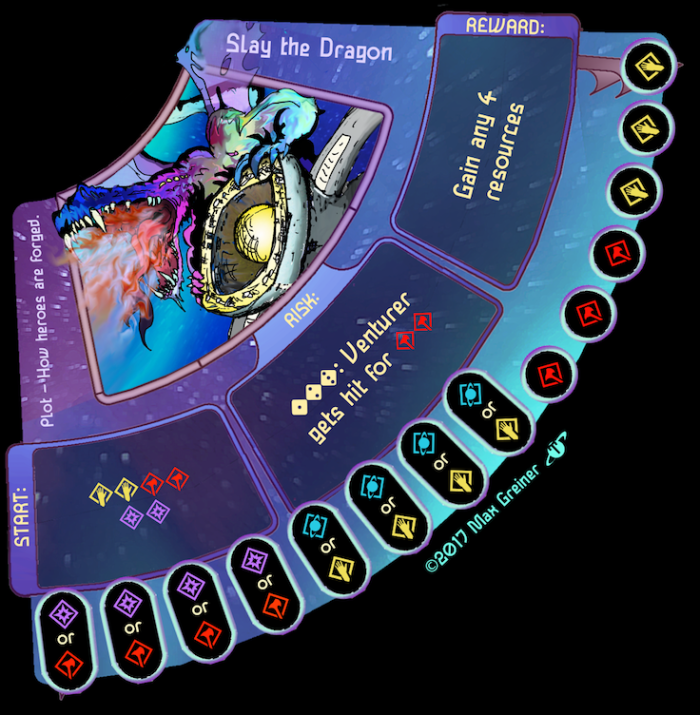 How to meet VICTORY conditions: Plots require a number certain of resources marked by the Plot’s  victory tracker. The instant the tracker is full, the Plot is considered complete, and players reap its reward. Resources can be added to the Plot victory tracker in any order, but can’t be used or removed once added, except by rogues & Hazards.

Venturing to provide resource: To ‘venture,’ a loyalist may or exhaust to provide his/her resources to their Plot victory tracker. First, roll a 6-sided die and note the RISK requirements of the Plot. If you fail the noted roll, you must follow the RISK test. If you succeed, you can add loyalists resources to the Plot Tracker.

All players lose if sustenance reaches 0, or if a player has 0 cards left in her/his Society at start of turn.

To recruit a rogue, spend 1  matching resource gem for each of the rogue’s motives. Any player can recruit any player’s rogue. New recruits are immediately unexhausted, can perform an ability on the same round.